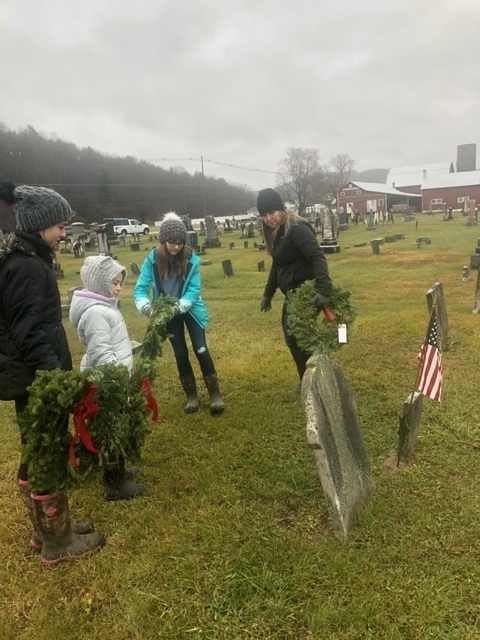 This year's 5th grade class chose Wreaths Across America for their Christmas Gift Exchange charity.  Each year, a charity is selected for a monetary collection in lieu of a student gift exchange and teacher presents.  The first round of donations from students and families in Mrs. Philippi's and Mrs. Funk's homerooms came in at $150 and we were able to sponsor 10 veterans' wreaths at the Rome Cemetery.  A second wave of donations brought in another $300!  Because the local cemeteries were fully sponsored, we decided to sponsor 20 wreaths to be placed at Arlington National Cemetery in honor of the veterans on our staff - Mr. Paul Burgert, Mrs. Terri Allen, Mr. Matt Holmes, and Ms. Vanessa Perez.  Three fifth graders and their families joined Mrs. Philippi at the Wreaths Across America ceremony in Rome on Saturday, December 18th.  Madilyn Callear, Julia Keeney, and Xavier Lockwood were lucky enough to participate in the ceremony after some local boy scouts were not able to attend.  After the ceremony, we joined other volunteers and helped place 210 wreaths on veterans' graves in the Rome Cemetery.  After placing the wreaths, veterans' names were recited out loud and we thanked them for their service.  It was a wonderful experience for everyone.  We hope to continue the tradition next year!